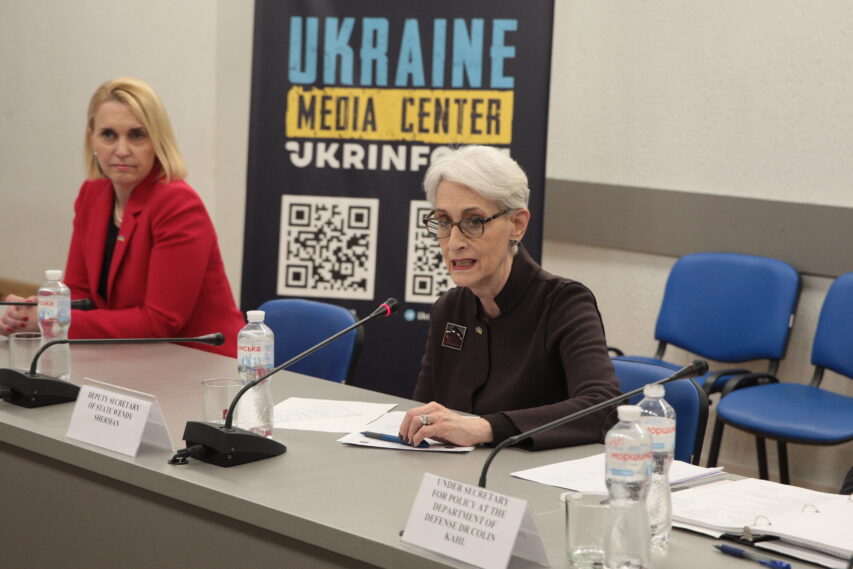 U.S. Deputy Secretary of State in Kyiv: Putin decided to push further, so we will push too

U.S. Deputy Secretary of State Wendy Sherman spoke about the details of her visit to Kyiv to discuss Ukraine’s needs with President Volodymyr Zelenskyy and other officials. She talked about this during a conversation with journalists at Media Center Ukraine — Ukrinform.

Sherman informed that her delegation, together with Colin Kahl, Under Secretary of Defense for Policy and Jonathan Finer Deputy National Security Advisor arrived in Ukraine today after visiting Germany and Poland, to send a signal of unwavering and stable support for Ukraine and to express their admiration with Ukrainian resilience and courage.

“Above all, we wanted to take a personal look at the situation and hear from President Zelenskyy, other high-ranking officials and Ukrainian citizens on the ground, what Ukraine needs now, what is needed to ensure security and protection, what will be the best support for the energy industry and humanitarian needs,” — she noted.

Sherman also said that they discussed the topic of possible declaration of martial law and further mobilization in russia. In addition, the Deputy Secretary of State noted that Ukrainians defend and liberate territories with exceptional valor and ingenuity and have become the personification of courage, while russia has failed to achieve any of its initial strategic goals.

According to her, the U.S., NATO and partners remain united and are fulfilling their promises of assistance. In particular, Sherman noted the security assistance worth over USD 25 billion and the US Congress’ approval of another aid package worth USD 45 billion in December. “Putin has decided to push further, so we must also push, and we will do it,” — the U.S. official concluded.