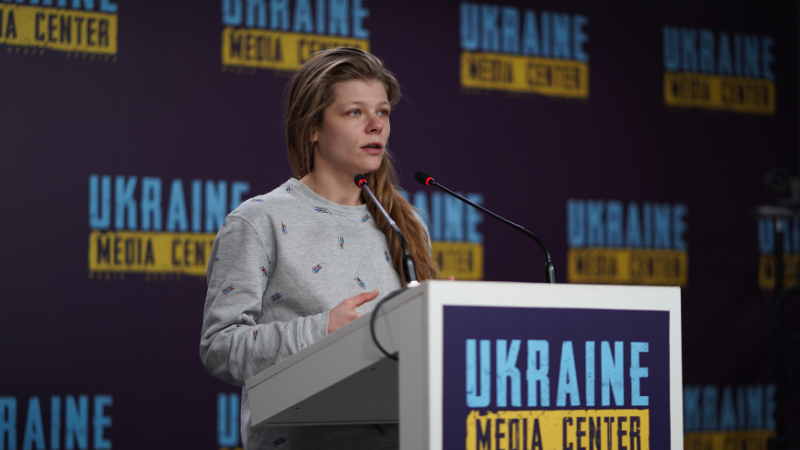 “They Claim to Be Rescuing You, But If You Don’t Want To Be “Rescued,” You’ll Die,” Actress Anastasiia Pustovit Tells Her Story about Two Weeks under russian Occupation

Anastasiia Pustovit, a Ukrainian actor, spent two weeks in the town of Nemishaieve near Kyiv under the russian occupation. In Ukraine Media Center, the actress told the story of her getting into captivity, helping to rescue other locals, trying to reach Ukrainian checkpoints under shelling, and presented a russian occupier’s profile.

“As the war started on February 24, I decided to join my parents in Nemishaieve. The town of Nemishaieve is about 10 km away from Bucha in the east and 13 km away from Borodianka in the west. We found ourselves in a situation where either the town would be destroyed if we resist, or it would become a rear base for the russian military.”

“On February 26, we set up our local volunteering headquarters in the local community center to help and support our community. We had no electricity and water; all shops closed, and there was no access to medicines.”

“We had our first wounded on March 3. There were an anesthesiologist and a veterinary doctor. They were stitching up wounds with the regular angling line steeped in ethyl alcohol a day before.”

“There were 40 vehicles in the first russian convoy that entered Nemishaieve.

We could not leave the headquarters, and seven people stayed there for three days, just everyone expecting to be killed.”

“A tank approached the community center, where our headquarters were located, and shelled the street and the buildings nearby to prevent people from resisting and make sure they don’t leave their houses. They (russians) murdered people in the streets just because they wanted it. All wounded people whom we helped were regular villagers.

“russians exited armored personnel carriers with weapons and alcohol stolen from our shops.”

“We dispatched a volunteer in a car to a bunker sheltering five hundred people, and we loaded the car with food and water. Russians noticed the movement and shot him in front of his wife and children. It happened near the school; they shelled the school after that.”

“russians put their vehicles nearby and, using us as a cover, fired shots at Bucha and Irpin.”

“They did try to promote their propaganda, talked to our women, gave candy to the children. They could not achieve anything. The only thing we could do was to speak Ukrainian only. It was our way to resist.”

“An occupier’s profile looks like a “kind abuser.” They try to make an impression that they are oh-so-kind, that they are helping us, while explaining at the same time that “if you do something not the way we told you, we will kill you.” So, they claim to be rescuing you, but you’ll die if you don’t want to be rescued on their terms.

“We started leaving the town at our own risk and peril. There was a message that green corridors would be opened and that ceasefire would be implemented. However, there was no ceasefire while we went. We heard multiple shots and saw cars marked “Children” left in roadside ditches after being shot at. We knew that the convoy moving in front of us had been destroyed by fire and, once we got to our side, we found out that the convoy moving behind us was fired at as well.”