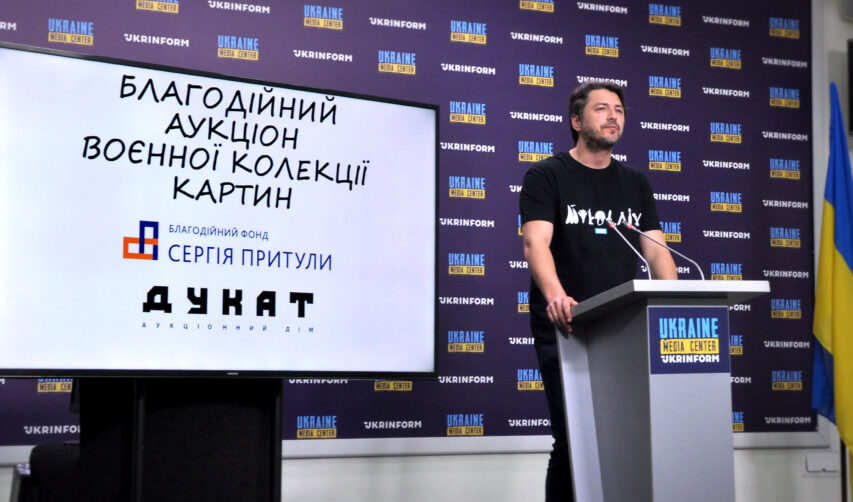 Ten paintings by contemporary artists to be put up for auction: Serhiy Prytula Charitable Foundation announces fundraising to pay for production of Ukrainian drones

Volunteer and founder of the charity foundation, Serhiy Prytula spoke about the charity auction in support of the Armed Forces of Ukraine on June 14 at Media Center Ukraine — Ukrinform.

“The cooperation of art and volunteers benefits the Ukrainian army, so we are not going to stop. The scope of what has been done becomes clear only when you personally go through everything that can be purchased for the Ukrainian army with these funds. At this auction, we offer ten paintings by contemporary Ukrainian artists. The list of authors is quite significant, it is a selection of the best artists,” — Serhiy Prytula said.

According to a well-known volunteer, Serhiy Prytula Charity Foundation works closely with colleagues from Army SOS Foundation, who are known as the developers of Valkyrja drones: “We always want to contract Ukrainian-made drones. There are enough people in our units who know how to use these drones. Unfortunately, the manufacturers cannot cope with the large number of orders.”

According to Serhiy Prytula, in addition to being able to produce drones relatively quickly Army SOS Foundation can also train operators.

“We are talking about 50 drones and operators; training. Prytula Foundation takes on the financial side of this issue. We will also provide means for the transportation of drones. It will cost more than one million dollars. My dream is that we will cover some of these needs through the auction,” — he said.

The head of the charity fund said that Valkyrja, a Ukrainian drone, has certain advantages. It is made of polyfoam, so it is almost impossible to shoot it down with small arms.

Leonid Komskyi, a Ukrainian gallery owner and collector, founder of Ducat Auction House said it was the second charitable auction held in their auction house.

“The auction starts with an idea. In our case, it is a charity auction. Therefore, first of all, we pay attention to the pieces that will become lots. So far, we have exhibited ten works, mostly by contemporary Ukrainian artists, who are rather well-known and the best in the country. All the pictures are relevant to the situation in the country. The auction itself has been taking place for a week. It combines online and offline formats. On the website of “Dukat” auction house, everyone can look at these pieces and the course of the auction. There is even an exhibition of these paintings. Anyone who has registered can participate. The final (part of the auction) will be broadcast live tomorrow. After we talk about these lots, lot closing will take place in an orderly fashion. There are already bets on certain lots, some even have two,” — he said.

Matvei Vaisberg, a modern Ukrainian painter and a graphic artist, even returned to Ukraine to join the auction: “I was outside Ukraine and learned that there would be an auction. Therefore, I decided to come to Kyiv and paint a picture for this auction. It is a great honor for me to take part in the auction. My painting “Angel of the Armed Forces of Ukraine” has been put up for auction. I paint a lot and there is no single picture, no piece of work that is not directly or indirectly related to the war and the situation in Ukraine.”