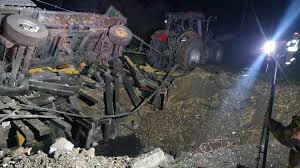 After the fall of russian missiles on the territory of Poland, it is hardly worth hoping for military actions from NATO, but this will allow Ukraine to raise more determined questions about provision of the modern missile defense systems. Fedir Venislavskyi, People’s Deputy of Ukraine, Member of the Verkhovna Rada of Ukraine Committee on National Security, Defense and Intelligence, Representative of the President to Verkhovna Rada of Ukraine, made this report during the briefing at Media Center Ukraine — Ukrinform.

“I cannot be overly optimistic that the provisions of the North Atlantic Alliance Collective Security Treaty will be put into effect, because this means that the entire NATO coalition must enter a war against the russian federation. I think that there will be increased sanctions pressure on rf. I think that yesterday’s events will allow us to raise more decisive questions about providing Ukraine with the most modern missile defense systems, which will make it impossible even to hypothetically repeat the case that occurred on the territory of the Republic of Poland. But in my opinion, it is hardly worth to hope that there will be any particular military actions,” the People’s Deputy stated.

Also, based on consultations with Oleksii Reznikov, the Defense Minister of Ukraine, Fedir Venislavskyi spoke about expectations from the seventh Ramstein format meeting, which will be held by the Ukraine defense contact group on November 16.

“After yesterday russia made one of the most massive terrorist attacks on the territory of Ukraine, after missiles hit the territory of Poland, there is optimism that this will give confidence and determination to the governments of our partners in providing Ukraine with those types of weapons that will help more efficiently liberate the territories from the enemy, close the sky more efficiently and ensure that rf’s terrorist attacks using missiles and unmanned aerial vehicles do not achieve their goal,” the People’s Deputy said.