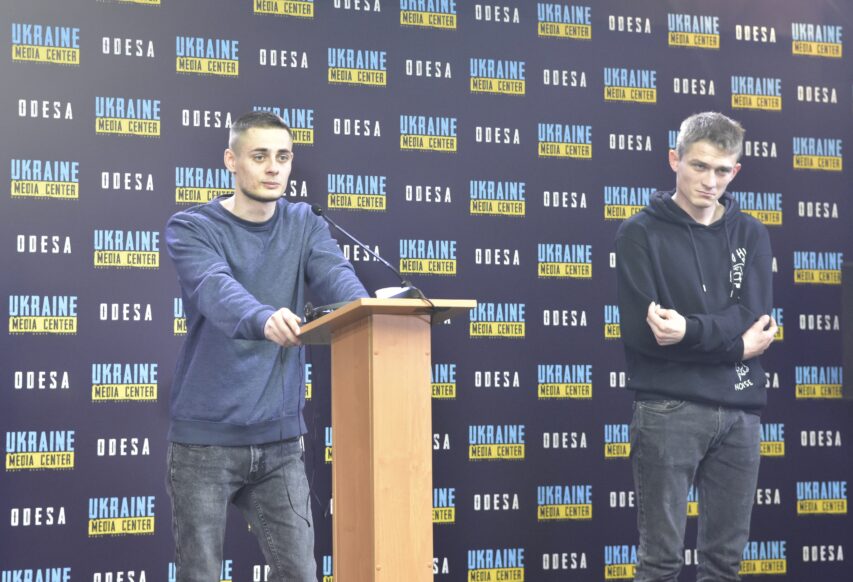 “They told the same stories and were afraid of us,” – former prisoner of war Dmytro Rashkevich about the occupiers’ behavior.

The commander of the pontoon-bridge department of the 703rd separate operational support regiment shared this during a briefing at the Media Center Ukraine – Odesa.

As Dmytro said, he was captured near Berdyansk in April. At first, he managed to pass himself off as a student, but then those interrogating him discovered his photos in military uniform through the Telegram application on his phone.

“There’s a folder in Telegram storing all the photos and videos I’ve looked at. And when they showed me that photo with the military uniform, it was proof that I couldn’t be a student.”

While in captivity, the serviceman tried to find out from the russians why they came to Ukraine.

“They communicated different things, but everyone said that a relative, brother, or acquaintance came from Ukrainian captivity or the place of hostilities without genitals. This is how I understood that almost all those who returned are castrated. It is also interesting that even in a mask, they tried to speak more with an Eastern accent – like Chechens or Dagestanis. I don’t know why they did it. Maybe they were afraid of being recognized later,” Dmytro added.

After a few days, he was transferred to a colony in Berdyansk, where he spent 4.5 months in a solitary confinement cell.

“Everyone who guarded us was afraid of us. They tried not to look in and not to talk. We would not see them for several days. Then, they would appear, quickly say something, and leave. Again, they told stories about the horrors of Bandera’s people and severed genitals,” Dmytro said.

Next, Berdyansk prisoners were transferred to Sevastopol. As Dmytro said, it was only there that the Ukrainian prisoners were treated better and fed. But the main thing, as the serviceman says, is that at least some information began to surface. “It’s scarier than hearing someone being tortured or waiting for them to come to torture you – it’s a complete vacuum where you don’t know what’s going on with your family and Ukraine. What can you feel when you hear that Odesa was taken, Kyiv was taken, and only the West of Ukraine remained?” Dmytro added.