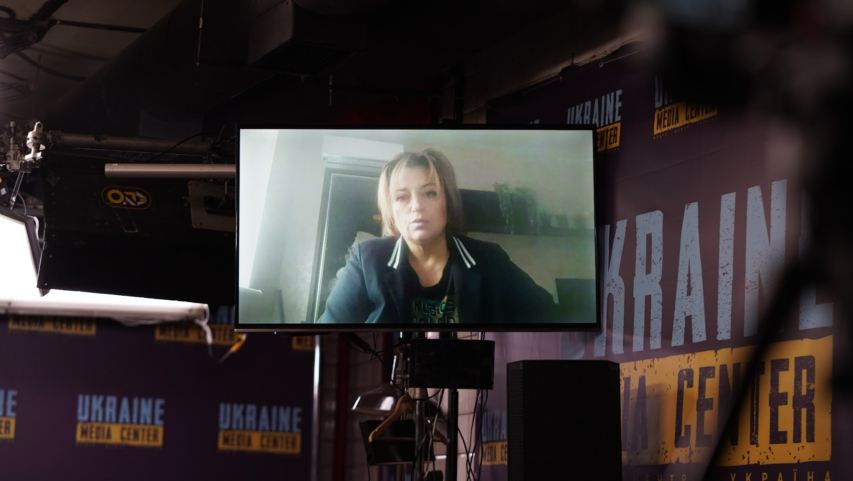 Journalist Anzhela Slobodyan spent six months in Kherson, which was occupied by the russians.

“I lived 6 months under occupation:” journalist Anzhela Slobodyan tells her story of working in russian-occupied Kherson

Journalist Anzhela Slobodyan spent six months in Kherson, which was occupied by the russians. During all this time, she did not stop her professional activities and was even captured by the occupiers. During the briefing at Media Center Ukraine, the journalist shared the details about life and work under occupation.

The full video is available here.

On work in the occupation:

“I couldn’t obtain information freely because the occupiers entered (the city), because it  wasn’t even possible to freely go out and work with my phone. That is, I shot everything on my phone, then edited it, if it was a news story. If there were live broadcasts, they were broadcast from home. I couldn’t go outside and work there freely because there were armed people nearby. And every time they could come up to me and take away my phone, see what I was filming there. Well, fortunately this didn’t happen throughout all these six months. When they came to my home and took me away, I was in captivity for 31 days. Only then did they look at my phones.”

“I was told that I was a spy, that is, there were different accusations. An agent of the Security Service of Ukraine, and a member of a reconnaissance sabotage group, and a spy. When I was released, I was even told that I had been spying on the FSB.”

On the mood of Kherson residents at the beginning of russia’s invasion:

“When the russian military entered, people generally all disappeared. There were no people. It was just an empty city. I didn’t know where all the people’s cars had gone, the streets were empty. People were even afraid to go to the store, to go out on the street to show themselves. After 2-3 days, the resistance movement started. People went out, went to rallies. They tried to reach out, so that the russian military would go home after all. But who is there to reach out to? People fought for their rights, to live freely on their land before the shooting started.”