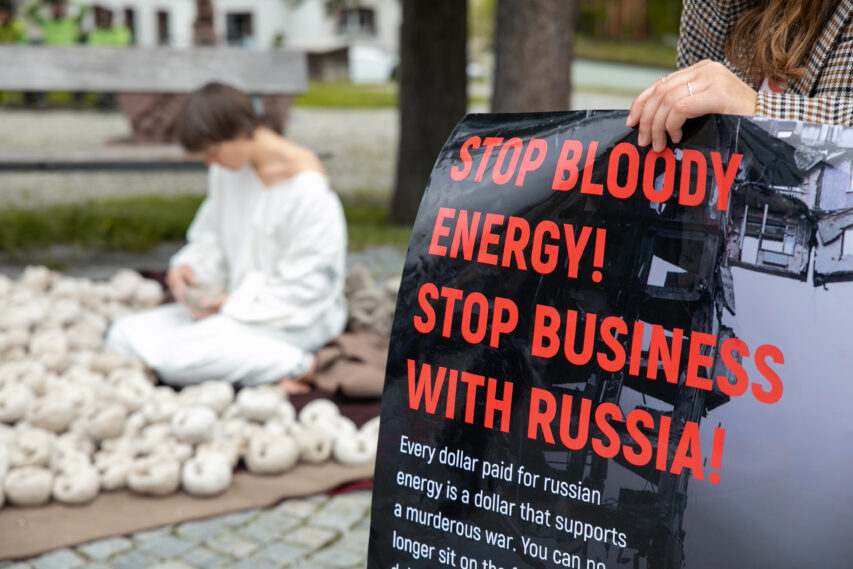 Stop Bloody Energy: activists held a rally in Davos against the energy business, which continues to work with russia

Dozens of activists from Ukraine and Europe within the Stop Bloody Energy initiative held a rally in Davos against the energy business, which continues to operate in russia.

russia has unleashed the most brutal and bloodiest war of the 21st century. russia has been destroying Ukraine for three months. Tens of thousands of people were killed, hundreds of towns and villages were destroyed. Nevertheless, russia continues to receive funding to continue the bloody war. Since February 24, the country has received more than 63 billion euros for the sale of its energy resources alone. Russians use every penny of this amount to kill innocent Ukrainians. For this amount you can buy almost 8,400 cruise missiles “Caliber”.

The main goal of the Stop Bloody Energy initiative is to call on international business and energy companies to stop working in russia and stop financing russian terror. At an economic forum in Davos, activists staged a “Time to Choose Your Way” rally to ask the business whether it was ready to sell the lives of innocent people to earn money in russia. What is more important: money or life? Each visitor to the economic forum decided for himself according to his conscience.

There was also a performance of Ukrainian artist Daria Koltsova “Lullaby”. This is the materialization of statistics on the real loss of children during the three months of the war, to “sing” the last lullaby and let go of the life of every Ukrainian child taken away by russia.

The organizers of the action are convinced that there is only one way to stop the war, to stop the russian aggression – to deprive the Kremlin of sources of funding. Business must leave russia. And first of all from the russian energy sector.

Dmytro Kuleba, Minister of Foreign Affairs of Ukraine, have visited the performance. “We are convinced that the only way to stop the war – to stop the russian aggression – is to deprive the Kremlin of sources of funding it so badly needs to carry on killing Ukrainians. Business must leave russia, now, starting with the energy sector,” mention Mr Kuleba.

Mr Kuleba continued, “russia does not have the technical capabilities to extract and transport oil, gas and coal. It needs the co-operation of the energy sector. Withdrawing that co-operation will both show russia it is alone, as well as depriving it of the funds it so badly needs.”

According to economists, in 2022 russia’s export earnings from energy sales could reach $ 321 billion. This is almost 5 of russia’s annual military budgets. The Kremlin can convert these funds into weapons that can destroy the whole of Europe.

russia will not be able to independently extract, transport oil, gas and coal in sufficient quantities without the support of international companies – this is a technologically complex process.

The organizers emphasize that if energy cooperation is stopped, russia will lose its main source of income and, consequently, will not be able to continue the war. The war will be stopped by sanctions, an economic boycott and the delivery of lethal weapons to Ukraine to fight russia. International business and energy companies must stop financing russian terror.

Full list of companies that still work in the energy sector of russia and finance Russia: https://bloody.energy