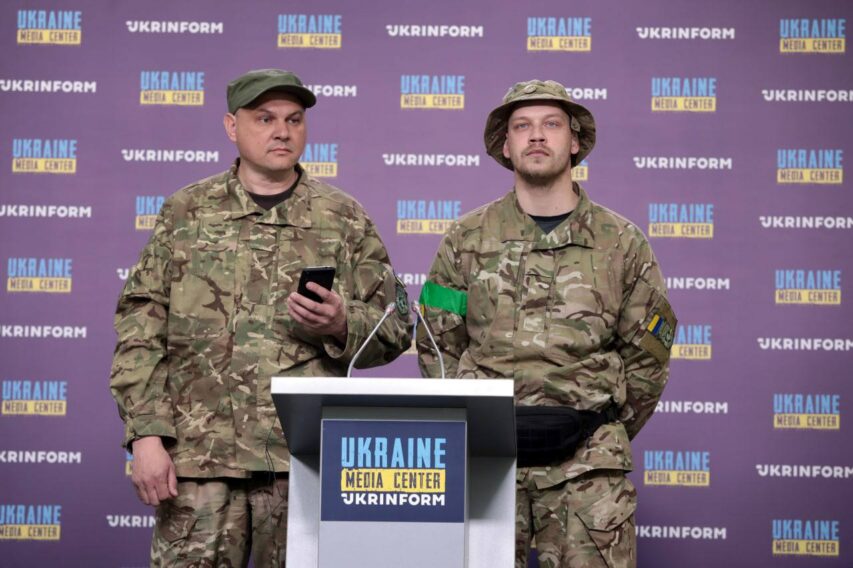 A large number of Belarusians have joined Ukraine’s fight against russia. The Belarusian battalion named after Kastus Kalinowski, which became a part of the Armed Forces of Ukraine, is already fully operational. The main goal of the Belarusian fighters is to defend the honor of their people and show that Belarusians do not support the criminal regime of lukashenko and putin’s actions in Ukraine.

Vadym Kabanchuk and Yan Melnikov, fighters of the battalion, told this today during a briefing at Media Center Ukraine – Ukrinform.

«We all know how much support the lukashenko regime has given russia. Missiles launched at Ukraine from the territory of our country, reconnaissance, territory for maneuvers – all of this is the support of the belarusian regime to the russian occupier. We defend the honor of our people. By our example, we show that Belarusians do not support the lukashenko regime and its actions,» – Vadym Kabanchuk said.

Battalion fighter Yan Melnikov said he had been in Ukraine since 2014, since the Revolution of Dignity.

«I arrived in Ukraine immediately, the day after the death of Mikhailo Zhyznevsky, who gave his life for the freedom of Ukraine. Now Belarusians continue to fight for your state. I am proud that we, Belarusians, have our own unit, the Belarusian one, within the Armed Forces of Ukraine. Together with Ukrainians and other peoples from all over the world, we defend Ukraine and freedom. We, the Belarusians who took up arms, defend the honor of our people,» – he said.

Yan Melnikov added that in Belarus, according to various estimates, only 25% support russia’s actions in Ukraine today, and only 7% are ready to go to war in Ukraine: «According to our estimates, we understand that the same mood is in the Belarusian army.

We are aware that about 20,000 people in the Belarusian army can fight, among them only one in four has ruscism and is ready to fight for russia.»

«Our activists are beaten to half-death for such actions. Belarus is under occupation – both the external and internal one. Belarusians are fighting for Ukraine. On the russian side there is no all-Belarusian formation, but there is one on the Ukrainian side,» – fighter of the Kastus Kalinowski battalion underlined.

Vadym Kabanchuk added that the community in Belarus had woken up after 2020. Many initiatives were founded, which joined the guerrilla war against russia.

«First of all, it is worth mentioning the cyber troops, which caused disruptions in the work of the Belarusian railway. It is also worth mentioning the guerrillas who carry out sabotage. According to the regime itself, they detained about 80 guerrilla groups that opposed the russian army. Recent detentions have been very brutal. Servants of the regime simply shot the boys in the legs, and the new laws generally allow the death penalty for guerrillas» – he emphasized.

He added they had no information about the explosions on the railway. However, there is confirmed information that the guerrillas burned signal control cabinets, which cannot be restored in Belarus in the current conditions, and thus paralyzed the work of the railway.

Hundreds of thousands of Belarusians have been forced to flee their country because of the repression machine. It gives us a recruiting base. These people are also actively involved in guerrilla warfare. We are looking forward to the time when we will liberate our Belarus as well,» – Vadym Kabanchuk said.

Fighters of the Belarusian battalion urged not to make concessions to the lukashenko regime and not to negotiate with it: «lukashenko is now trying to lift sanctions by sending a negotiating team to Europe. This is a very dangerous trend.

If this happens, it will only prolong the war in Ukraine.

Arrangements with this regime are a crime. It does not stop repression against its own people. Detentions and trials of our citizens are ongoing».