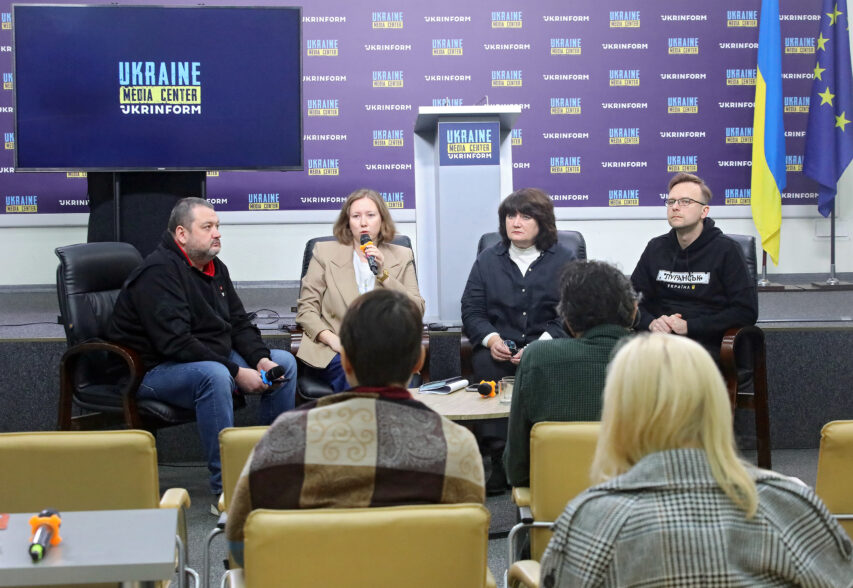 Panel discussion “Intentional Militarization of Education, Language, Culture and Other Weapons of the “russian world” in the Temporarily Occupied Territories”

Media Center Ukraine — Ukrinform Hosted the Panel Discussion “Intentional Militarization of Education, Language, Culture and Other Weapons of the “russian world” in the Temporarily Occupied Territories”

russia’s violent militarization of education on the temporarily occupied territories of Ukraine and how the invaders exploit that: these and other topics were discussed by the participants of the panel discussion “Intentional Militarization of Education, Language, Culture and Other Weapons of the “russian world” in the Temporarily Occupied Territories”, which was hosted by the Media Center Ukraine — Ukrinform. The hour-long discussion was attended by Olha Skrypnyk, a Board Chairperson at the Crimean Human Rights Group; Valentyna Potapova, Head of ALMENDA Center for Civil Education; and Andrii Dikhtiarenko, Editor-in-Chief of “Realna Hazeta” online media outlet.

Please watch the discussion at the following link.

We also offer powerful quotes from the participants:

Olha Skrypnyk, a Board Chairperson at the Crimean Human Rights Group, about the russian educational system in the temporarily occupied Crimea:

“I will add another argument, a proof that the educational system in the occupied Crimea entirely acts in military interests. That is order #210 of the rf’s ministry of defense exists (and we submitted this order as evidence to the International Criminal Court), which defined the measures to be carried out in schools. It means that it is the ministry of defense and not the ministry of education that gives orders on how the educational system should be organized. And it listed various sports and cultural events, which formats should be used, and so on. This particularly means that education in the russian system is completely subordinated to the interests of rf’s defense, namely, to militaristic ones.”

Andrii Dikhtiarenko, Editor-in-Chief of “Realna Hazeta” online media outlet, on what is taught in the so-called “cossack” cadet classes in the temporarily occupied Luhansk region:

“We have found the so-called special course for schools for grades 5–11 “history and culture of ‘cossacks’ of Luhansk region” developed in Luhansk region. After we have studied all these manuals and techniques, we have identified the following areas that children study. These are military training, the mandatory religious education, and it is clear that we are talking about Orthodoxy subordinated to the Russian Orthodox Church, these are mandatorily family patriarchal traditions. By the way, this is very important, they constantly say that there is only a man and a woman, that a man, roughly speaking, should fight, a woman should stay at home. And it is also told very much about LGBT propaganda, in particular, in Ukraine. And ideological treatment, definitely. These are actually three such bases of ideological treatment: the first is russian empireship ideals (many people engaged in “cossacks” in the occupied territories of Ukraine are the advocates of this idea), the second is anti-Ukrainian political information (constant lessons of such political information, which tell in a distorted form everything that happens in Ukraine, about the war, etc.). And this is the so-called “cossacking”.

Valentyna Potapova, Head of ALMENDA Center for Civil Education, about that not only the russian defense ministry is engaged in education:

“I would not say that rf’s defense ministry is engaged in education, because I believe that this is such a synergy that has already taken place in the russian federation, when all ministries are now working for the war. I would like to read out a quote from the minister of enlightenment, which was at the beginning of occupation of the Kherson and Zaporizhia regions: “we must re-educate the population by introducing censorship, repression and suppressing pro-Ukrainian state positions in education and culture. To withdraw educational materials and ban all educational curricula with Ukrainian content, etc.”