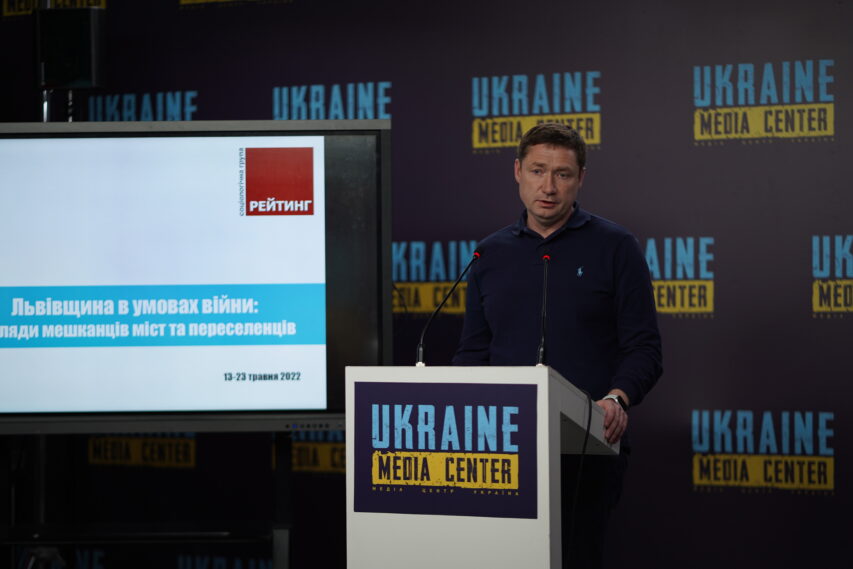 Most Lviv Oblast residents have a positive attitude to the people who came to Lviv Oblast during the war. Internally displaced persons and residents of Lviv Oblast are united in supporting Ukraine’s Armed Forces and actions taken by the President. Maksym Kozytskyy, Head of Lviv Oblast Military Administration, reported this at his press briefing in Ukraine Media Center based on results of the “Lviv Oblast during the War: Opinions of City Residents and Displaced Persons” survey carried out by Rating Sociology Group.

“I was pleased to find out that both IDPs and Lviv Oblast residents speak the common language and are ready to build the state together,” Maksym Kozytskyy said.

An absolute majority—90 percent of Lviv Oblast residents and IDPs—hope for the better when thinking about the situation in Ukraine. Oleksii Antypovych, Director of Rating Sociology Group, stated this while presenting the “Lviv Oblast during the War: Opinions of City Residents and Displaced Persons” survey.

“The first answer Lviv Oblast residents and IDPs staying in Lviv Oblast give to the question about their thoughts about Ukraine is hope, and this answer has the highest support level. We hope for the better; we believe in victory, and we have captured this hope in our other surveys. It is extremely comforting that nobody gives up,” Oleksii Antypovych explained.

Furthermore, the survey showed that more than 90 percent of locals and IDPs supported Ukraine’s Armed Forces. And more than 80 percent are prepared to endure financial difficulties to defeat russia as long as may be necessary.

Please follow the link to find out more about the “Lviv Oblast during the War: Opinions of City Residents and Displaced Persons” survey by Rating Sociology Group.