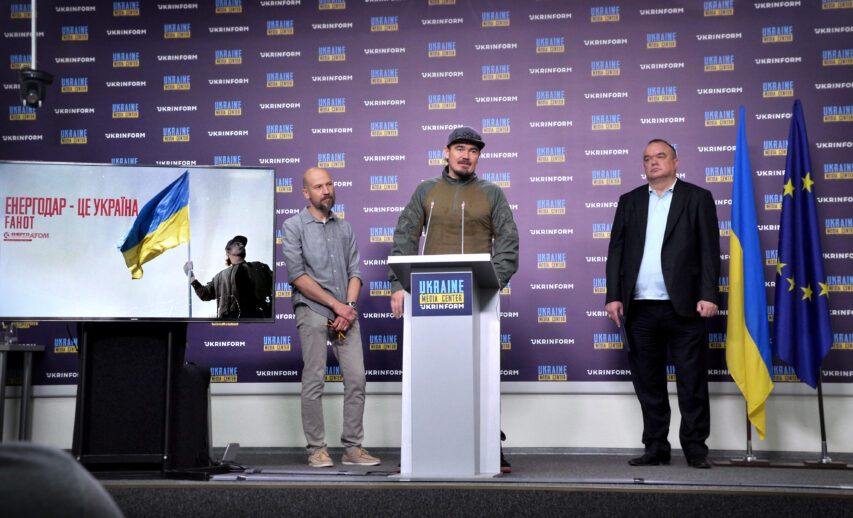 Energodar is Ukraine: music video in support of workers of occupied NPPs presented in Kyiv

Tanok na Maidani Kongo’s (TNMK) music video “Energodar is Ukraine!” was presented at Media Center Ukraine — Ukrinform. The video was created by the joint efforts of Energoatom National Nuclear Energy Company and TNMK band. It is dedicated to the unbreakable determination of the heroes of the Zaporizhia NPP and all occupied territories. The video was directed by Yurii Kovaliov.

Petro Kotin, President of Energoatom, pointed out that the employees of the nuclear power plant, who work under occupation, perform a feat every day. They are keeping Ukraine and the world safe from mortal danger, even under the enemy’s guns.

“I want to thank TNMK band for their initiative and this video, in which they realized our desire to show the world the truth that is happening at Zaporizhia NPP and the feat that the employees of this power plant and nearby cities perform every day. So that everyone understands the importance of this work for Ukraine and the whole world,” — he said.

According to Kotin, the russians are abducting personnel, killing nuclear plant workers and creating impossible conditions to work in, but the NPP staff won’t give up. They work and continue to ensure the NPP is operational and provides electricity.

Recently, the occupiers brutally beat an employee of the Zaporizhia NPP Andriy Honcharuk, who died in the hospital. The russians also broke into the residence of Serhiy Shvets, shot him with automatic rifles for his pro-Ukrainian position. He survived only by a miracle.

“The staff works in inhumane conditions. Support is very important for them. All of Ukraine is with you, all of Ukraine is for you. The Ukrainian Armed Forces are near, and we will come soon to free you from these invaders. 95% of people in the occupied territories support Ukraine, that’s why it’s so difficult for them in those conditions,” — Energoatom President pointed out.

Fahot, leader of TNMK band, said that the video had been shot very quickly, with the awareness of how difficult it is for Ukrainians in the conditions of the active combat, and especially for those who are under the russian occupation.

“With this song and music video, we are trying to cut through the occupier’s lies — we have not forgotten about you. Ukraine will never abandon you. Everyone is working to ensure that all territories are de-occupied as soon as possible. We sang specifically about Energodar, because now the city is under occupation and is working for all of us. No one could have imagined what would happen when the barbarians seized the largest nuclear power plant in Europe,”— the singer said.

Yurii Kovaliov, music video director, thanked the entire team that had worked on the video and stressed that the idea for the video belonged to Energoatom: “I was shocked when I heard in the news that the residents of Energodar had not let the armed army of the occupier into the city. I saw a video of them stopping these tanks with their bare hands. Can you imagine this? After that, I understood – Energodar is a symbol, it is a flag behind which all the occupied territories and all the people who live there stand.”

The main character of the video is an employee of a nuclear plant who is captured and shot by russian soldiers. However, he survives. On his body, he has many dog tags with the names of occupied Ukrainian cities on them. All the tags are shot, but in the end, the Ukrainian flag flies over Zaporizhia NPP and all the cities.