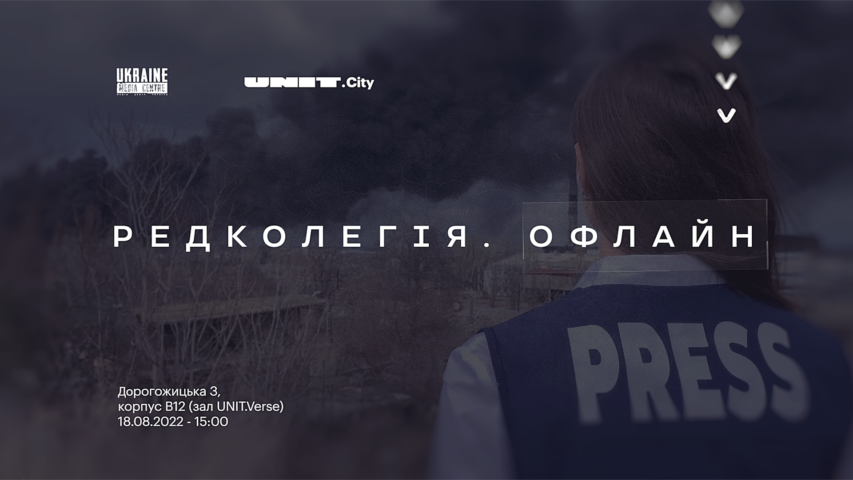 Participants of the “Editorial Board. Offline” event discussed the future of Ukraine’s media market and specifics of media work during the war. The meeting of media professionals took place in the office of the Unit.city innovative park on August 18. The event was organized by Media Center Ukraine.

Speakers at the event included:

About combining a citizen and a journalist in oneself:

“There is nothing to combine. A question like this assumes that there is a citizen and there is a journalist. However, a journalist is just a curious citizen who has sorted out something and wants to tell it to others. Thus, combining my citizen engagement and journalism is not a problem for me. I like the definition of our profession coined by our colleague Pavlo Kazarin who said that a journalist explains a country to itself. This is what the civic stance is about because no journalist exists separately from their readers and spectators.”

About changes in online media after the start of the all-out war:

“Before February 24, we did not know what our potential was and how much we could work. We did not know how flexible we could be, optimizing everything from the business point of view. We had to fire a few people and focus the remaining manpower on tasks that brought money in. Our investors lost a lot since the onset of the war, and we have to earn to pay ourselves now.”

Oleksandr Tkachenko, Minister of Culture and Information Policy of Ukraine

About the impact of russia’s all-out invasion on Ukraine’s media market and his forecasts of the post-war development of the market:

“It will be an effectively complete change of the media landscape in Ukraine. Yes, we can say that there were oligarchic media, which enabled the television market to develop, first of all, with too many channels. It is the negative side of the coin. The positive side of the coin is that a huge amount of high-quality content was created over this time. I cannot overstate that, in terms of quality, Ukraine’s TV market was way ahead of most Eastern European markets, with two or three TV channels, one public broadcaster, and two private channels… When I asked managers of some media groups some time ago about what they would do after the war, they told me they had not thought about it yet. I think it is a sign of fear that the changes awaiting us will be huge. I don’t know how many channels will remain there. A minority, I think. I think that the majority will have to get accustomed to salaries that are twice as low… Even after the fighting ends and we triumph, it will take at least 3 to 4 years for the market to come back to life.”