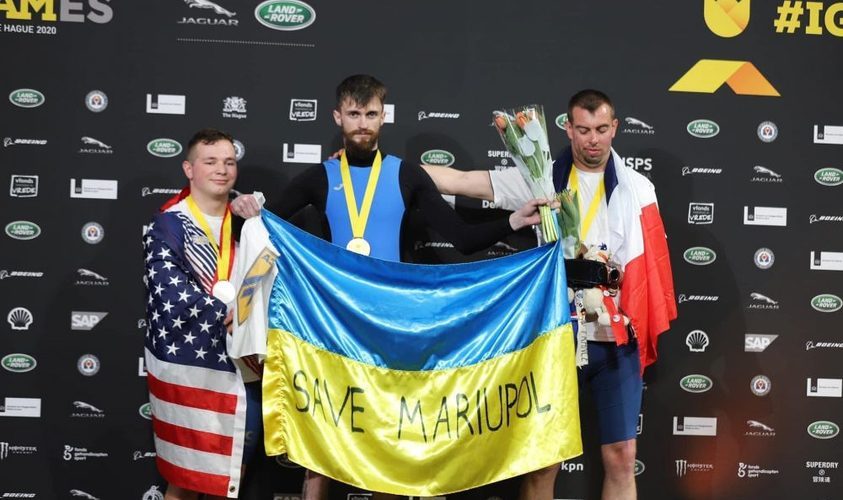 Lviv native and veteran of the russian-Ukrainian war Ihor Halushka won a gold medal for Ukraine in indoor rowing at the Invictus Games in the Netherlands. At the award ceremony, he raised the Ukrainian flag with the #SaveMariupol inscription.

«The Ukrainian flag with the #SaveMariupol inscription was raised in The Hague today. This was done by a veteran of the russian-Ukrainian war Ihor Halushka from Lviv. He won gold in indoor rowing at the Invictus Games The Hague 2020. Ihor’s brothers in arms from the Azov Regiment are now fighting for Mariupol. We call on the whole world to hear our unconquered soldiers and help unblock the Ukrainian city. Glory to Ukrainian Heroes!» – Andriy Sadovyi wrote on his Facebook page.

«My brothers in arms are now fighting in the encircled Mariupol without enough provisions and ammunition. They are defending the Ukrainian land there, and thanks to their courage and strength, I can compete here! They give me strength!» – says Ihor Halushka about his motivation to fight, according to the Lviv City Council Department of Sport. Additionally, Viktor Lehkodukh also won the second medal at the Invictus Games on the same day. In addition to the gold medal in shot put, Victor added a silver medal in indoor rowing to the list of Ukraine’s awards.