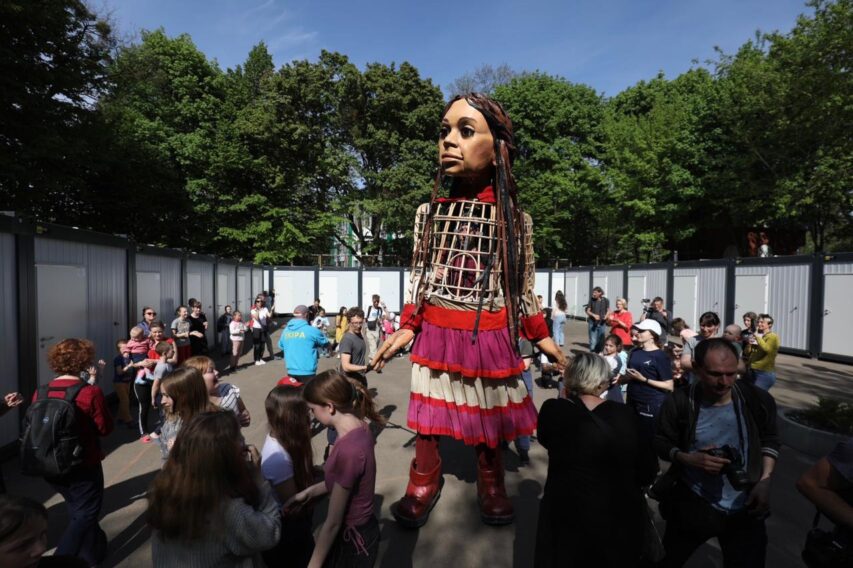 Amal, an Almost Four-Meter Tall Puppet, Visited an IDP Camp in Lviv and Went for a Walk at Stryiskyi Park

An international representative of refugee children co-authored by a co-producer of Star Wars is visiting Lviv.

Today, Amal has visited an IDP camp in Stryiskyi Park and met with the displaced families sheltered temporarily in module houses. It is the first appearance of the giant girl puppet after her 8,000-km long trip in 2021.

Amal, a 3.5-m tall puppet, represents a 10-year-old migrant girl from Syria who walked 8,000 km from the Syrian border to Manchester in the UK in search of her mom. According to event organizers, the puppet epitomizes millions of children who lost their homes and were separated from their families. She dreams about finding her mother, going to school again, and starting a new, happier life—a life of a child that the war had stolen. Thus, the puppet represents all refugee children worldwide and carries the message, “Don’t forget about us.”

“The war machine has no face; it is metal grinding on metal, while newspapers are full of numbers and statistics. However, victims of the war have names, and children are often affected by the war most heavily. This is why Amal is in Ukraine now. She’s a big girl, and she can remind everyone that there are many children like her in the world,” Amir Nizar Zuabi, the creative director of The Walk project, said.

A team of famous producers and directors worked on creating the puppet, including David Lan (the playwright at the Royal Court Theatre and the artistic director of the Young Vic Theatre), Tracey Seaward (The Two Popes, The Queen, Star Wars), and Stephen Daldry for The Walk Productions together with Handspring Puppet Company under the guidance of the creative director Amir Nizar Zuabi.

The visit of the artists’ team to Lviv is supported by Lviv City Council. Amal was greeted in the city by actors from the Puppet Theater, the Lviv Opera, and the Voskresinnia Theater.

“The world united to support Ukraine in defending democracy. Amal’s visit invites the whole world’s attention and helps Ukraine remain on the top pages of newspapers. This attention offers yet another chance to stop the war and help the Ukrainians. Every article, publicity, every social event help the Ukrainians, and we are grateful for this important event organized in our city,” Andrii Sadovyi, Lviv Mayor, said.

Together with its creative team, Amal also brought humanitarian aid collected in the UK for the Ukrainian children. Also, the project team will visit one of the city’s hospitals, albeit without the giant puppet.

“We are most grateful to Lviv for the warm reception. Amal carries a strong desire for peace and friendship among the people. Her goal is to help bring attention to the plight of hundreds of killed and wounded children and millions of Ukrainians who had to leave their homes because of the war, David Lan and Tracey Seaward, The Walk’s producers, summarized.

By the way, it takes three puppeteers to control Amal—a “walker” inside who also brings her face to life and one puppeteer for each arm. The Walk’s puppeteer team includes artists from the whole world, including refugees. The puppet itself was built of cast reeds and carbon fibers. The puppet’s name, Amal, means “hope” in Arabic.