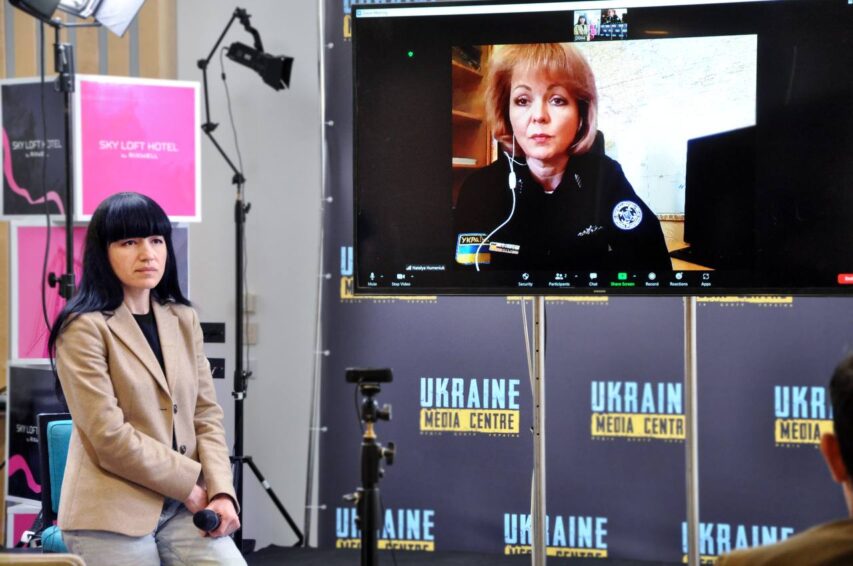 After the Moskva cruiser hitting, russian attacks against the southern Ukraine will intensify, the enemy will try to retaliate, – Humeniuk

After russia’s flagship of Black Sea Fleet, the Moskva cruiser suffered defeat by the Armed Forces of Ukraine, the enemy attacks may intensify, but the South of Ukraine Security and Defense Forces of Ukraine are prepared for them.

This was stated by Natalia Humeniuk, Chief of the Joint Coordination Press Office of the South of Ukraine Security and Defense Forces, Captain 1st rank at a briefing at the Ukraine Media Centre, taken place in Kyiv.

This at a briefing at the Media Center Ukraine (Kiev) said the head of the joint coordination press center of the security and defense forces of the south of Ukraine, Captain 1st rank Natalia Humeniuk.

“There was an attack on the naval group, the russia’s flagship of Black Sea Fleet “Moskva” cruiser was hit, quite direct, meanwhile having symbolic value. As a result of the direct impact, the ammunition load was detonated. A struggle for survival began, other [russian] ships tried to provide assistance. However, even the forces of nature were on the side of Ukraine: the storm did hinder a rescue operation. I cannot report through all the details of the operation. There is information that the damages are so severe to such an extent the ship’s combat power is undermined. We are waiting for strong evidence, since the statements of the aggressor country are not absolutely convincing for us”, – said Humeniuk.

The South of Ukraine Security and Defense Forces of Ukraine are ready to enemy strengthening attacks after such a successful operation of the AFU.

“We are aware of the intensifying actions against. For the enemy it is a very significant loss in terms of financial, armed, as far as harmed image. It was not only the cruiser blow up, it was also a major blow to imperial ambitions, convincing enough our victory. However, it is a battle victory so far, not the winning of a war. The enemy will take revenge, both by missile attacks and artillery fire, not excluding attempts at a landing operation. We are ready, we are aware of all the threats,” added Natalia Humeniuk.

According to her, attacks on Mykolaiv, in particular rocket attacks using cluster munitions banned by international conventions, continued at night and this afternoon. In Kherson, temporarily seized by the enemies, the russians continue propaganda activities in respect of forming unsustainable quasi-republics there, but the local population does not respond to those calls.

“I want to thank the Kherson residents for their resilience and convincing stance. Hold on, we will be there soon,” Humeniuk said.

In addition, she noted that in the south of Ukraine, russia uses its traditional tactics of shelling the local population and civilian infrastructure in the captured territories, wherein trying to blame the AFU.

“In general, the situation in Mykolaiv and Kherson Oblasts is described by the fact of enemy placing the equipment and units among the local population, among the civilian infrastructure: schools, kindergartens, in the yards of local residents. Then under the cover of night it leaves these positions and shells them, accusing the AFU of firing upon the civilian. But we already know precisely who is telling the truth and who is lying in this war. The AFU is not attacking the local people,” Humeniuk said.

She also added that the South of Ukraine Security and Defense Forces are mopping-up the positions that they have already managed to liberate from the occupants, eliminating reconnaissance groups.

“We are confident that our troop’s advance will begin very soon. All the necessary south defense forces are engaged, their actions are quite effective, although the enemy does not surrender,” summed up Humeniuk.