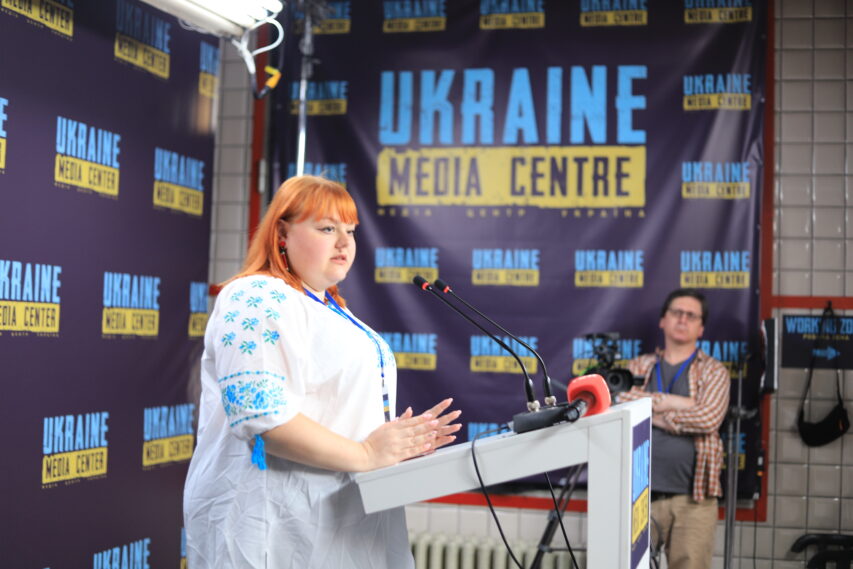 Journalists of Kherson region refuse to give up and continue to work despite the threat to their lives and oppression from the occupiers. A briefing by the officials of Culture and Public Relations departments of the Kherson City Council, who had managed to escape from the occupation, was held in Media Center Ukraine. They spoke about the new reality of the journalists’ work in the region and addressed media workers from all over the world.

Olena Pimienova, Head of the Media Unit of the Media and Public Relations Department of Kherson City Council. On life and work under the occupation:

“Life under the occupation is when you can’t go outside with your phone, because it contains a lot of contacts of journalists, officials, friends with famous surnames. You have photos of Kherson locations there. You can never be sure that this phone won’t be checked or confiscated. “

“A lot of people are disappearing, disappearing straight from the streets, including journalists. In a few cases that I know of, they were lured to a meeting, allegedly through friends. That is, a friend calls: “Let’s meet, there is some information”, the person leaves, and never returns.”

On the escape from the occupation:

“At the first checkpoint, when we were leaving the city, the occupiers had two lists. The first, as far as I understood, contained law enforcers, participants in the anti-terrorist operation, and the other one contained journalists. There was a certificate of membership in the National Union of Journalists and a vyshyvanka (embroidered shirt) at the very bottom of my bag. It is my only one, and I decided to take it out. Although no one could guarantee that I would stay alive if the russians found it. “

“There were about 60 checkpoints. The biggest fear was at the last one. We spent the night in the field and woke up in the middle of the night because the russians started firing at our positions a few trees away from us. But we were very happy with the whole bus when we heard that our (soldiers) were firing back. “

Svitlana Dumynska, Head of the Culture Department of the Kherson City Council. On Kherson region’s resistance to the occupiers:

“At first, there were huge rallies, people came out, they were not afraid of anything at all. None of the occupiers expected that the Kherson region would not accept them. But after the use of weapons, noise grenades, then, of course, fewer people started coming to the rallies, but the resistance movement became stronger. People refuse to cooperate with the occupier. They show that Kherson is Ukraine in every possible way.”

“When we write that the rag of aggression, and this is the only name that the russian flag is called in the Kherson region, is removed somewhere, you can not even imagine how much support this news receives in all the chats, which residents of the Kherson region can use.”