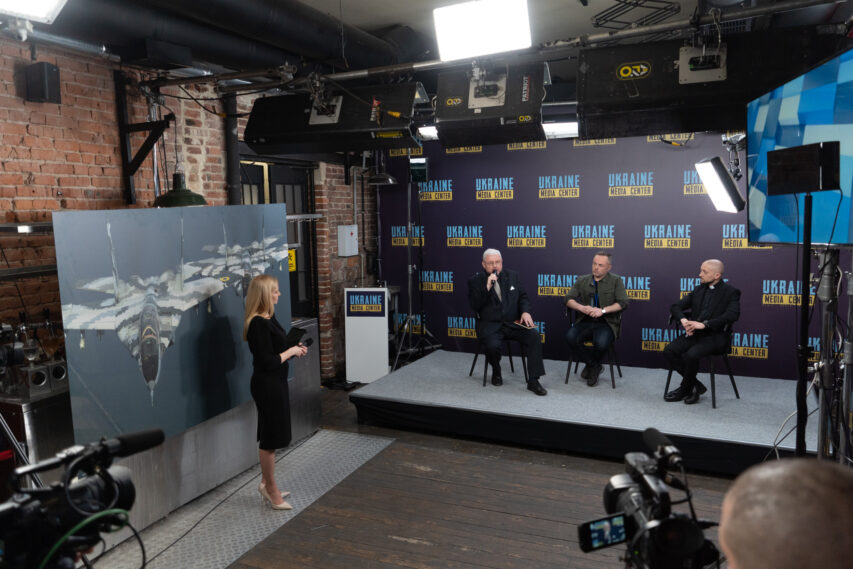 SPECIAL PROJECT BY UKRAINE 24 TV CHANNEL AND MEDIA CENTER UKRAINE: rethinking the meaning of May 9 in Lviv

9 May: a holiday, Remembrance Day, or just a date. A panel discussion dedicated to rethinking the attitude to May 9 took place in Lviv as part of Ukraine 24 TV channel and Media Center Ukraine special project. Famous historian Andriy Pavlyshyn, former Deputy Director of the Institute of National Remembrance Oleksandr Zinchenko, army chaplain Andriy Zelinskyy, and journalist Roman Tsymbaliuk took part in the discussion.

The discussion’s most interesting quotes.

«May 9 has absolutely not been needed for a long time, since the foundation of the Ukrainian state. In our country, it was imposed by politicians who believed that in this way they could avoid russian aggression and soften the russian fascist public. Anyone who reads at least some basic texts about World War II clearly understands that we have nothing to do with the Russian political religion created during the Brezhnev era and revived by putin’s freaks for their dictator.

I am sad that our politicians are so afraid to «flush this holiday down the toilet.»

We have May 8, a day of remembrance for the dead civilians, our soldiers, who were sent to the front without proper training.  Memory and grief does not mean walking the streets with flags, riding in tanks, threatening to repeat something. This is the day when people in black come to the cemetery and remember the dead.  Therefore, it is necessary to abandon all the ideological ugliness that the fascists inflicted on this holiday, postponing it to May 9.»

Oleksandr Zinchenko, former Deputy Director of the Institute of National Remembrance, on different May 9 perception of Ukrainians and russians:

«Ukrainians perceive their contribution to the history of World War II differently than russians. For russians, it is about the greatness of the country, and for us it is an important memory about every person.»

Andriy Zelinskyy, priest of Ukrainian Greek Catholic Church, army chaplain, on the meaning of May 8:

«If we want to live tomorrow in a European society based on values ​​that respect humans, the answer is obvious. We remember the memory of a person on the day when all Europe does.»

Roman Tsymbaliuk, journalist, on celebrating May 9 in russia:

«If veterans saw what they were doing with Victory Day, at least they would be surprised at first and then wonder, «You, our grandchildren and great-grandchildren, do you even understand what you want to repeat?» Well, in principle, the first steps in the «repeat» part are being taken now, when Ukraine is killing russian invaders, and this will continue, because today they are Nazis on Ukrainian soil, as it was 77 years ago, a little more.»