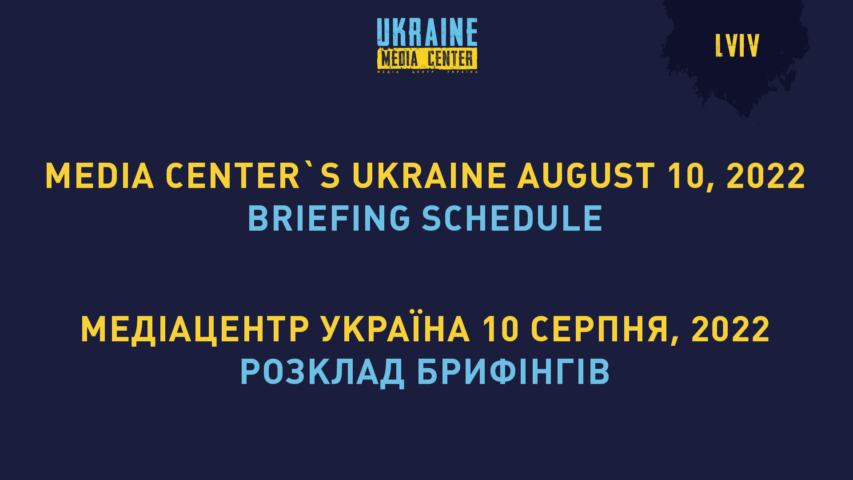 11:30 AM – Ihor Ostash, Ambassador Extraordinary and Plenipotentiary of Ukraine to the Republic of Lebanon (online)

On August 9, a buyer company in Lebanon refused to accept the first vessel carrying Ukrainian corn. The refusal was explained by Ukraine’s having delayed the delivery for more than 5 months.

1:00 PM – Maksym Terletskyi, Deputy Director of the Strategic Planning Center of the City Institute of Lviv

Lviv Defense Cluster and the City Institute have made 80,000 armor vests for Ukraine’s Armed Forces since February 24, 2022. Over 1,000 people are involved in the production process. The Ministry of Defense appointed LDC as the principal coordinator of armor vests production volunteers for the time of the war.

Initially, all armor vests were supplied directly to storage facilities of the Ministry of Defense to be handed to the forces as soon as possible.

During their briefing at Media Center Ukraine, the speakers will tell how the idea of the Lviv Defense Cluster was born and how the production of the protective gear was organized.

On August 10, Media Center Ukraine is hosting a discussion on war crimes and international justice and its coverage in the Ukrainian media.

Ruslan Topolevskyi, Human Rights Defender and Expert of the Center for Legal and Political Research “SIM”

Issues to be discussed:

The discussion corresponds with the launch of IWPR’s weekly Justice Report newsletter, which provides an overview of key events and links to essential reading from Ukrainian and international reports alongside dedicated IWPR reporting and analysis.

The event is expected to take about 1 hour

Visitors are requested to come 10 to 15 minutes before the event starts.