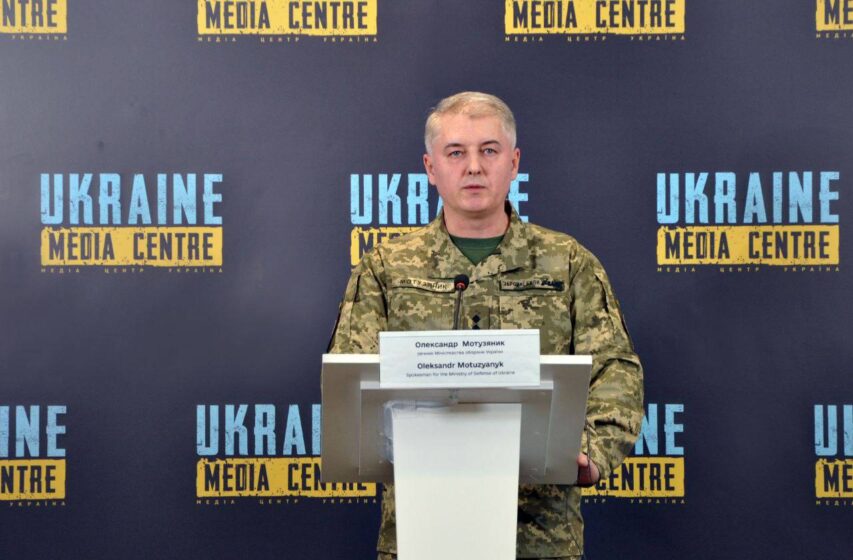 Russian troops carry on conducting offensives in the Eastern operating zone. The largest concentration of occupants activity can be observed in the Izium-Barvinkove direction, in the area of the junction railway station in Popasna, in Sievierodonetsk urbanized area, the city of Mariupol and on the Zaporizhzhia-Donetsk road section.

This was stated by Oleksandr Motuzyanyk, Spokesman for the Ministry of Defense of Ukraine at the Ukrainian Media Centre, taken place in Kyiv.

In the Slobozhansky direction, the Russian army continues to partially block Kharkiv, subjecting it to artillery fire and air strikes. The enemy is consolidating and fortifying its positions in the districts of Balakliia and Lozova.

In the districts of Izium and Barvinkove, Russian troops units conduct offensives, including with a view to seize control of railway communication.

In the Sievierodonetsk direction, Luhansk Oblast, hostile units are keeping on assault operations near the settlement of Zarichne attempting to advance in the direction of Rubizhne.

“According to the data from Ukrainian intelligence sources, a mass blood draw donated by citizens is being held in the Belgorod Oblast, russia, for the needs of the russian Armed Forces,” said Motuzyanyk.

On the South Bug direction, enemy assault actions are ongoing in the areas of Pravdyne, Tavriisk, the settlements of Shevchenkove and Ternovi Pody come under artillery fire. The enemy is trying to improve its tactical position on those parts and consolidate on the administrative borders of the Kherson Oblast.

With regard to Volyn, Polissya and Siversk directions, of the Armed Forces of Belarus separate units continue to perform operations on the Belarusian-Ukrainian border strengthening in Brest and Gomel Oblast, Belarus. Russia to take full advantage of the territory of Belarus for all types of reconnaissance to carry out.

In the Black Sea and the Sea of Azov operational zones, enemy ship groups isolate the combat area, pushing reconnaissance and providing the seaside direction with fire support. As of now there are two arsenal ships carrying  cruise missile type as Kalibr with its general volley is at least 16 missiles in the Black Sea.

“Over the past 24 hours, our soldiers repelled ten attacks by russian occupants, targeting the Donetsk and Luhansk Oblast territories. The Armed Forces of Ukraine Air Forces altogether with the anti-aircraft artillery crews of the Ukrainian Ground Forces and Air Assault Forces, the marine corps and the National Guard shot down fifteen aerial targets in the last 24-hours: nine enemy UAVs, three aircraft and three helicopters,” said Motuzyanyk.

The Ministry of Defense adds that the enemy continues to launch missile and artillery strikes on residential areas of Kharkiv, Luhansk and Donetsk Oblasts, hitting infrastructure facilities.

“In the occupied territories, the enemy adopt terror tactics against Ukrainian citizens. The murders, torture, persecution of local authorities and clerics, seizure of local businesses, blocking evacuation routes and humanitarian aid convoys never stopped. The occupiers block all relief supplies delivered from Ukrainian-controlled territory to occupied or besieged settlements.The enemy is making preparations to hold a so-called referendum on the annexation of the occupied territories in Kherson and Zaporizhzhia Oblasts to Russia. Occupation troops are blocking the departure of the local population from the occupied territories, including military draft age men,” said Motuzyanyk.