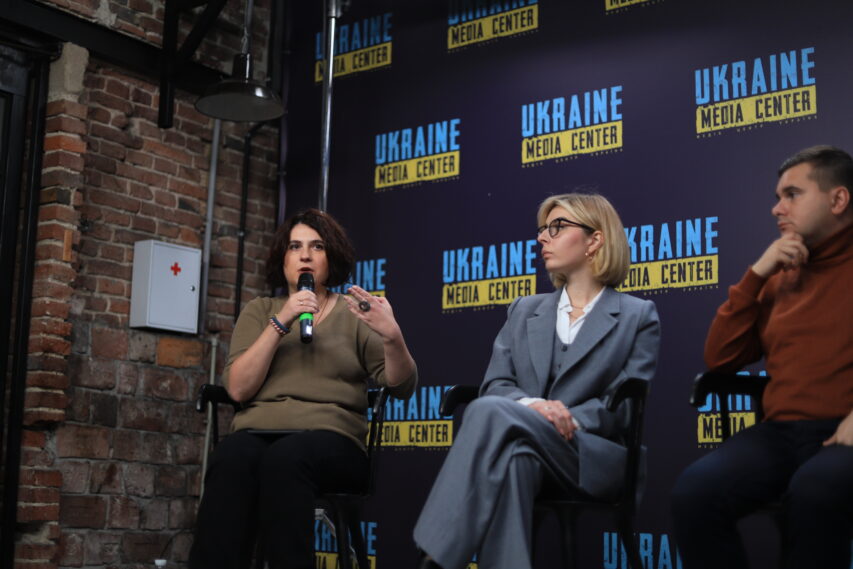 Russian Narratives and How to Deal with Them: Media Center Hosted the Discussion

How the russian propaganda narratives changed during the war and how to keep the West interested in Ukraine: these and other subjects were discussed at the Media Center Ukraine by Otar Dovzhenko, Head of the Independent Media Council; Maria Sahaidak, Expert at the Center for Strategic Communication and Information Security; Borys Potyatynyk, Professor at School of Journalism and Communication of Ukrainian Catholic University; Olga Guzhva, Project Manager – Ukraine Voices, Institute for War & Peace Reporting (IWPR), and Andrii Drozda, journalist.

Please watch the full video of the discussion here.

We also offer powerful quotes from the participants:

Otar Dovzhenko, Head of the Independent Media Council, on the influence of russian propaganda:

“Another thing about russian propaganda that is important to say is that we often perceive it as acts of communication aimed at convincing someone of something. Actually, it is mostly addressed to people who are already convinced. It means that it is cultivation of the view of the world, which is also often completely absurd, not holistic, broken, contradictory. They spread a lot of different narratives into the media landscape that contradict each other.”

Maria Sahaidak, Expert at the Center for Strategic Communication and Information Security, on combating russian disinformation:

“The truth remains our main weapon, no matter how abstract it may sound. If we do not tell the truth about what really happens and leave the informational void, the aggressor will fill this void with its narratives and messages. Second, we need to show that russian propaganda still functions in the European, in the Western market very actively.”

“I agree absolutely that it is required to produce, in addition to the “victim” image, which is very useful and popular, the “winner” image too and provide content from this perspective. This can be optional. Many options are possible, because there should also be a “despite” stance and it will include women, businesses that recover, and many, many different stories.”

Borys Potyatynyk, Professor at School of Journalism and Communication of Ukrainian Catholic University, about how else to interest foreigners in Ukraine’s topic:

“I’ve thought about another one thing — start-ups that can attract attention. Yesterday I watched something known to everyone — Worldometer, which constantly shows in real time how much is spent on drugs every day, on military affairs. If it were something like this from Ukraine: I do not know whether to add to the Worldometer, or a separate start-up, but so that the world can see how much was destroyed and how much russia will owe and these figures are growing”

Andrii Drozda, journalist, about media market in the country:

“I do not believe that we are under the threat of nullification of the media in Ukraine, it’s just that this market has been frankly bloated in recent years. There were interested people, owners of these media, and now we call them oligarchs. Very rich people who owned their media, there was varying degrees of interference in editorial policy, but it has always existed.”