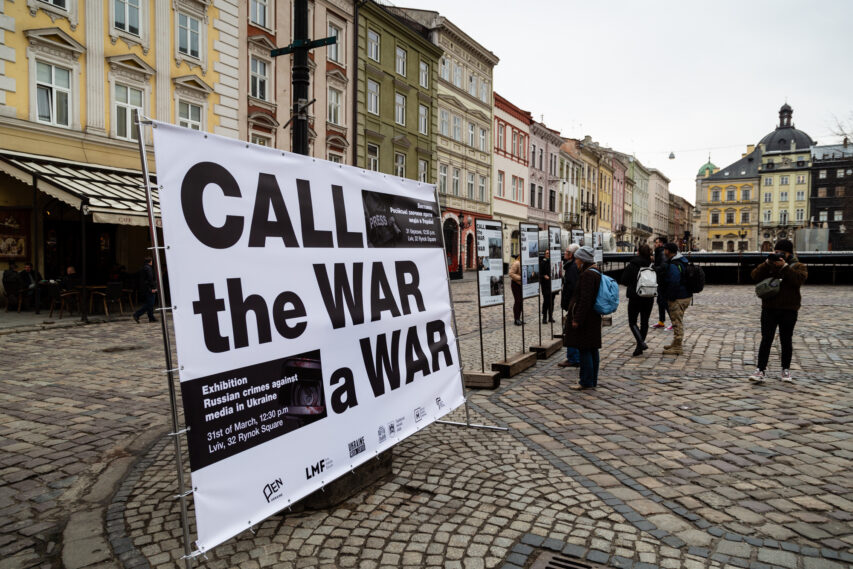 Russian Crimes Against Media in Ukraine: Solidarity Action With the Journalists Took Place in the Lviv city center

An exhibition, «Call the War а War: Russian Crimes Against Media in Ukraine After February 24 2022», was opened at Rynok square, 32 in Lviv on May 31, 2022. The project aims to speak about the female and male journalists who died, were captivated or persecuted due to a full-scale war that Russia started against Ukraine. The project also reminds and calls on the international media community to call the war of Russia against Ukraine a war, not «a crisis», «a conflict», or «a military operation».

Among the people who attended the opening ceremony, there were friends and colleagues of the journalists who died, suffered, disappeared or were captivated since the beginning of the full-scale invasion of Russia in Ukraine. Politologist Mykola Davydiuk told the story of a dead American journalist, Brent Renaud.

«The Russian forces target Ukrainian and Russian journalists for one simple reason. Here (in Ukraine), they violate all possible military laws and want to hide it. May we always remember the people who have lost their lives to save others; who didn’t stay aside when they saw someone else’s grief; but they went to the most dangerous spots to help the whole civilized world learn the truth».

RFE/RL journalist Halyna Tereshchuk spoke on the injury of RFE/RL correspondent Marian Kushnir and on other stories of colleagues who cover military felonies of Russia:

«Many of my colleagues work in the war zone to show that everything that happens in Ukraine is not a war with Putin; it’s a war with Russia.

We are not just Ukrainian journalists who are at the battlefront or home front; we are the citizens of Ukraine. That’s the difference: this goes through our hearts and our emotions. This hurts much».

Dmytro Khorkin, the general producer of Ukrainian Radio and board member of the National Public Broadcasting Company of Ukraine, talked about the death of a cameraman Yevgen Skakun after the missile struck the Kyiv TV tower in Dorohozhychi. Mr Khorkin also briefed about the working conditions of The Public Broadcasting Company of Ukraine. Mariana Pietsukh shared the story of her colleague Viktoriya Roshchyna who was released from captivity.

«I don’t think that ballistic missiles or aircraft are used during the crisis or military conflict — or whatever word one uses to replace the word “war”. It’s nonsense. In Kharkiv, I’ve seen the shelling of a TV tower. The most horrible sound that I’ve ever heard was the sound of an aircraft that dropped a bomb. I ask my foreign colleagues to call a spade a spade, as it is crucial for us».

The exhibition lasts till April 4.

The event was organized with the support of NGO “Ukrainian branch of the International PEN Club”, NGO “Lviv Media Forum”, NGO “Institute of Mass Information”, Ukraine Media Center, Lviv City Council and George Gongadze Prize. The organizers stress that the world must accept that Russia is the aggressor. That’s why it’s crucially important for the foreign journalists and media to talk correctly about the war felonies in Ukraine.