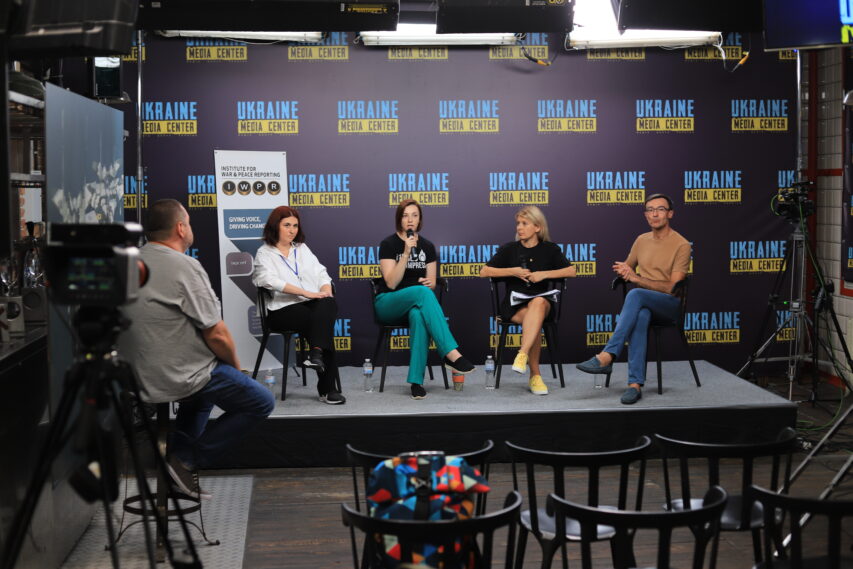 “Moral and Ethical Aspects of Journalism during the War:” discussion at Media Center Ukraine

On August 4, the Ukraine Media Center hosted a discussion on the topic “Moral and Ethical Aspects of Journalism during the War.” During the event, the participants discussed how journalists should cover events during the war, check their sources, and what guidelines to use when solving ethical work issues.

The event was held in partnership with Institute for War & Peace Reporting (IWPR), Ukraine Voices Project.

Here are the most interesting quotes from the panelists:

Svitlana Zhabyuk, Managing Editor of Tvoe Misto media hub on the importance of the work done by media during the war:

“If a soldier is on the front line and has a helmet, body armor and a weapon, he feels confident. If there is a war in the country, and your media has a defined mission, standards and values, then you feel confident. Does that mean you won’t make mistakes? No, it doesn’t. But you can be honest and open with your audience.”

Olga Guzhva, Program Manager of IWPR’s Ukraine Voices project on why it is important to call the enemy by its real name:

“It is very important to call russians as russians, and the russian federation as the russian federation, because this is the evidence base. Today, journalists are witnesses to crimes, and these crimes must be documented. The foreign community must also understand what and how we are talking about (the news). That’s why it’s important to use professional language that is as emotionally neutral as possible.”

Zoya Krasovska, Analyst at Lviv Media Forum on the importance of clear wording:

“The big danger is that news is often perceived only by a headline. Anything beyond the headline remains unread. And what a person understands about the situation depends on what is indicated in the title. If the headline does not correspond to the content of the message itself, which is laid out under it, then we (the media) are misleading our audience. That is, in fact, we are simply deceiving our readers.”

Oleg Paniuta, a TV host on the combination of the positions of a citizen and a journalist:

“Actually, it’s very difficult on the one hand, and very easy on the other hand. As an instrument, as a means of conveying information, you should not care about your civic feelings when you are conveying information, when you are in a news format. When you are in the format of your original project, then I believe that I can afford and allow myself to express myself in a way that I would not be able to afford (otherwise), or to illustrate this or that news event. This is how I separate these things for myself.”