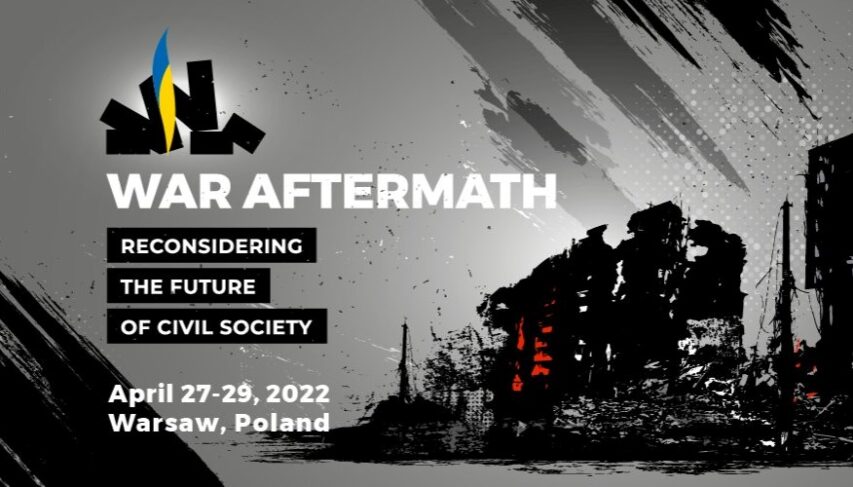 The international conference «War Aftermath: Rethinking the Future of Civil Society» started in Warsaw on April 27, 2022. The Conference was organized by ISAR «Ednannia» (Ukraine) and the Foundation for the Development of the Education System (Poland) with the financial support of the US Embassy in Ukraine and the Black Sea Trust for Regional Cooperation (a project of the German Marshall Fund). The Conference brought together historians, diplomats, politicians and experts to discuss various aspects of the Russian war against Ukraine.

Dr. Andrzej Szeptycki, a political scientist and lecturer at the University of Warsaw, stressed that Russia in its various historical manifestations has been consistently destroying Ukrainian statehood. By doing so, Russia emphasizes that Ukrainians can only exist under the care of Russia which is the so-called «older brother» of Ukraine. Dr. Szeptycki stressed that in the past Poland had twice managed to break out of such «embraces» of the Russian empire.

MP and Chair of the Verkhovna Rada Committee on Ukraine’s EU Integration, Ivanna Klympush-Tsintsadze, mentioned that three Ukrainian revolutions – 1990, 2004 and 2013-14, as well as the current Russian war against Ukraine occurred because of the desire of Ukrainians to have their own independent state and protect the values ​​of freedom and democracy, which are sometimes taken for granted in the West. Ukraine is defending itself in a bloody war for its right not to be a «gray zone» or a «bridge» between Europe and Russia and therefore Ukraine will seek the opportunity to join the EU and NATO, despite the resistance of skeptics. Ms. Klympush-Tsintsadze also called on the world community to think now about what Russia will look like after its defeat.

Former diplomat and longtime UN official Mr. Oleksander Matsuka drew attention to the misperception of international organizations as supranational governments, when such organizations are in fact only venues for meetings of sovereign states. Mr. Matsuka touched

upon the effectiveness of the UN. He recalled how the Soviet Union’s veto over the situation in Korea was bypassed through the «Unity for Peace» resolution. As an example, he also cited the UN resolution on sanctions against the apartheid regime in South Africa as well as the UN resolution depriving South Africa of the right to participate in the UN General Assembly. He also mentioned other examples. In his words, for the sake of the future of mankind, international organizations must change not only «in the name of peace», but also in the name of justice and bringing the perpetrators to justice.

Ukrainian historian Georgiy Kasianov, from the Maria Curie-Skłodowska University in Lublin, spoke about how Russia is abusing the past historical events, which has led to aggression against Ukraine. Mr. Kasianov noted that the current actions of the Russian leadership cannot be viewed from a rational point of view, as they are actually guided by the patterns formed by Russian propaganda and Russian «state historians». In such patterns, Ukraine is not perceived as a state different from Russia. According to this logic, Ukrainians are deprived of the right to exist as a separate nation. However, according to the theses of Mykhailo Hrushevsky (President of the Central Rada of Ukraine, 1917-1918) and Leonid Kuchma (President of Ukraine, 1994-2005), Ukrainians really perceive Russia as something different.

The closing speech of the event by the media expert and Director of the NGO «Detector Media» Halyna Petrenko was dedicated to Russian propaganda. She said that during Russia’s full-scale aggression against Ukraine in 2022, Russia’s spending on its disinformation machine has tripled, while military spending has increased by only 11%. She spoke about the influence of the Russian mass-media and drew a parallel with Radio Thousand Hills in Rwanda, which played a crucial role in the emergence of the genocide in Rwanda.

On the second and third days of the Conference, participants will discuss the interaction of civil society with donors and cross-sectoral cooperation. Further information can be found here: https://war-aftermath.ednannia.ua/for-media.html.

To Mass Media: to get a comment or to arrange an interview with the speaker, please, contact PR-manager Ivetta Delikatna: [email protected].