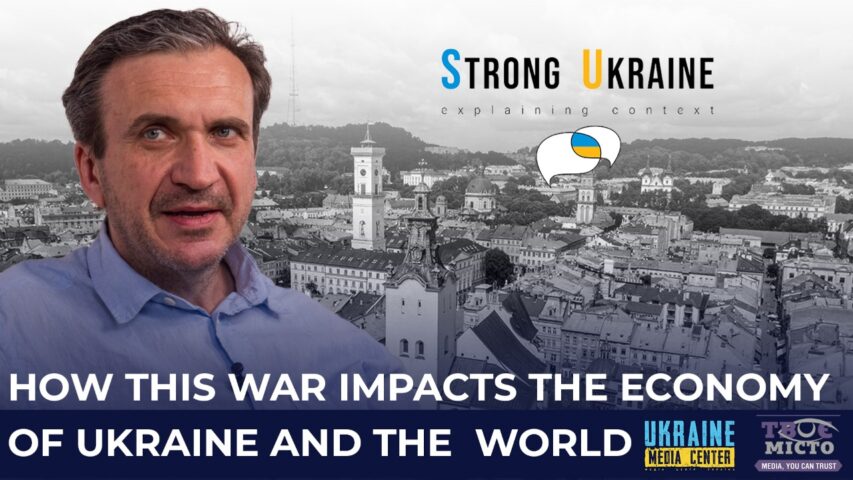 Discussion “How the war affects the economy of Ukraine and the world”, with Pavlo Sheremeta

A joint project of Media Center Ukraine and Tvoe Misto (Your City), Lviv’s Independent Media Hub, was launched on July 27. The first stream, with the participation of Pavlo Sheremeta, Ukraine’s former Minister of Economy and Trade, was hosted in the office of Tvoe Misto Media Hub. The topic of the discussion was “How the war affects the economy of Ukraine and the world.”

The most interesting quotes of the speaker follow below:

–     How does this war impact Ukraine and the world today? What consequences do you see as an economist in different areas of our social life?

–         The consequences are heavy and harsh; it is natural for a brutal war. Ukraine has been the subject of a brutal attack. It is a barbarian and middle age type of attack… Now we have from 5 to 6 million those, who left the country, out of who maybe 2 million return but 4 will not. Let’s think of it in 5 or 10 years – we will have only pensioners because they are not leaving. The normal ratio is 3 to 2 and 5 to 1 of young people supporting the pensioners. Ukraine before the war had 1 to 1 and after the war, it will be the opposite, which means we will have very hard times. And yet – we will have to survive.

–     Support the Armed Forces of Ukraine in the way you can – serving there or just supporting in other ways, including paying taxes, all the volunteer work, and all the aid we get from abroad. If the army loses then there is no state. We have to look at the government budget situation, which is gloomy. We already have a 5 billion dollars deficit and it will be growing. We need from 2 to 4 billion dollars to buy gas for the winter.

–     Before Russian aggression, we had around 20% of the world’s export of grain. We were strong in export metallurgy, and these are markets that we are losing. How will it impact our economy? Will it be enough to create conditions only for a free economy?

–     It is a free economy. The ability to export our grain from Odesa into the world is about economic freedom too but here we talk about external freedom. Our place in the world with it is secure for around 5 years, Ukraine is very important to replace it so quickly. I worry about the different industries, metallurgy and agriculture are in trouble, but IT is prospering. Last year for the first 5 months according to NY Times numbers, IT brought 2.5 billion dollars, this year IT brought 3.1 billion dollars to Ukrainian GDP.