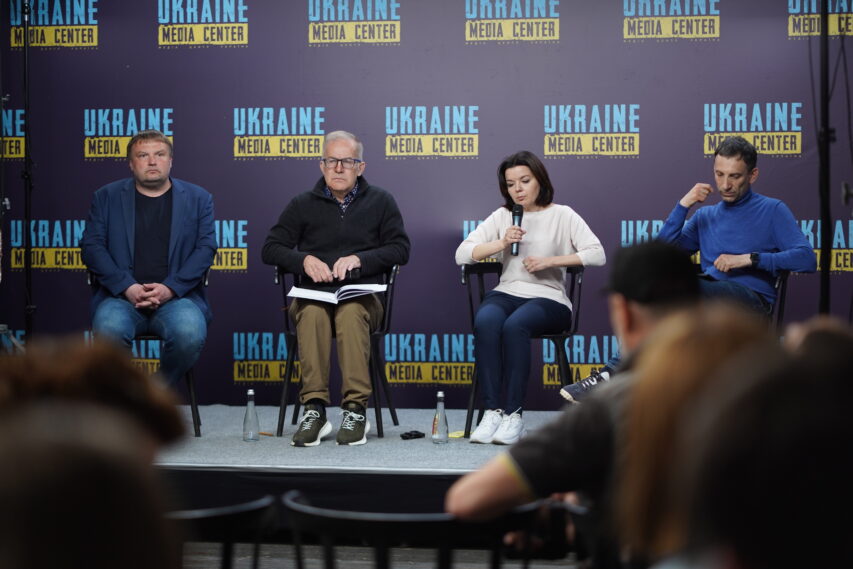 «Covering war in Ukraine: Safety and freedom of speech» panel discussion took place at Media Center Ukraine on the work of journalists during the wartime

TV presenter Marichka Padalko on the importance of journalists’ self-control during hostilities: «In such a situation, journalists need to be doctors… I can say about myself, I always found another place to give free rein to emotions, but not on the air. After all, people are watching not only to get information, it is especially important for them to see people they are used to seeing on the air. This would mean that the anchors are here too, life retains a part of normalcy. This support was also important.»

Ex-editor, Advisor to the Minister of Internal Affairs of Ukraine Vadym Denysenko on how russia lost information war against Ukraine: «russia believed they would defeat us in terms of information. In the weeks that followed, we told the truth, and they kept telling lies. As of today, their narratives have not changed in the last 7 weeks, they continue to talk about one thing: that there is no Ukrainian nation. The more they say this, the more Ukrainian society will understand that they are lying to us.»

Ex-Spokesperson of the OSCE Special Monitoring Mission in Donbas, Atlantic Council leading analyst and CNN commentator Michael Bociurkiw on the danger at work: «Journalism has become the most dangerous profession in the world. Today, journalists face the highest levels of imprisonment, physical assault and harassment. What makes this war special and different from others is that journalists are a deliberate target for russians.»Journalist Vitaly Portnikov on the role of Ukrainian journalists in the course of war: «The fact that the world believed Ukraine and Ukrainians trust their own information is the merit of Ukrainian journalists. It is very important that we are different from russia.»