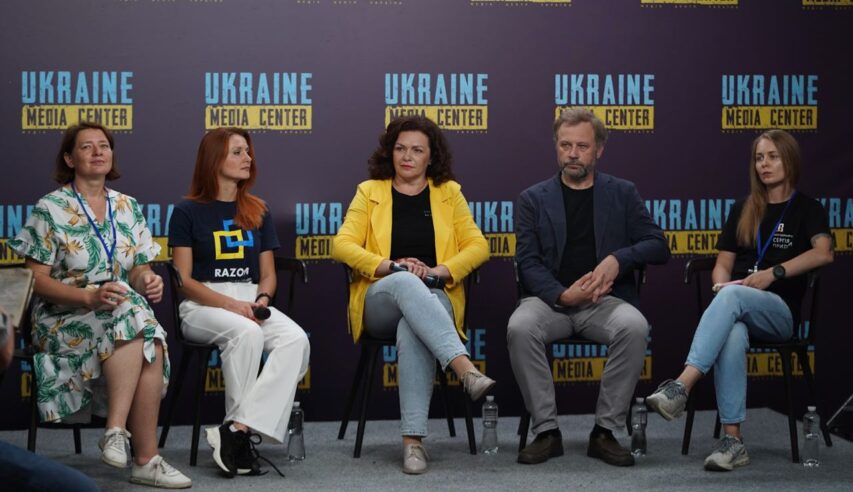 A discussion on Volunteering: Movement toward the Victory took place in Media Center Ukraine

Did the volunteering movement change after russia’s all-out invasion of Ukraine? How does society perceive volunteering? The discussion on Volunteering: Movement toward the Victory focused on these and many other topics. This one-hour-long discussion took place at Media Center Ukraine. Its participants included Halyna Bordun, Advisor to the Head of Lviv Oblast Military Administration, chair of the Medical and Psychosocial Support working group; Melaniya Podolyak, coordinator and manager of the NEST Project of Serhiy Prytula’s Foundation in Lviv; Andriy Salyuk, the founder of Lviv’s Knight civic initiative; Evelina Kurilets, Executive Director at Razom for Ukraine Charity Foundation; and Oksana Dashchakivska, Head of the Regional Office of the International Renaissance Foundation.

You can view the discussion video here.

The following are the most vivid quotes from discussion participants:

Andriy Salyuk, the founder of Lviv’s Knight civic initiative, spoke about the definition of a “volunteer:”

“If someone helps someone pro bono, this person is a volunteer. As soon as they start getting paid a salary, they become employees. Would anyone say it is bad? Just don’t call such people volunteers. It is advantageous because people selflessly and sincerely helping IDPs or the army – mainly the army, I would say –gained some prestige. So, all others who want to be paid a salary to do the same also claim to be volunteers for the sake of the nice image. However, let us call a spade a spade.”

Oksana Dashchakivska, Head of the Regional Office of the International Renaissance Foundation, talked about the future of volunteering:

“There’ll be fatigue. We are going to feel weary and exhausted quite soon, if not during the next six months. But, in a positive sense, I believe this situation will offer a chance to define one’s boundaries. So, it means that everyone will be searching for one’s normal side, returning to some extent to professional life, but partially remaining a volunteer. So, for us, the volunteering movement will become more structured; this is the trend I am seeing. But it also means a replacement will be sought, and even more people will become volunteers.”