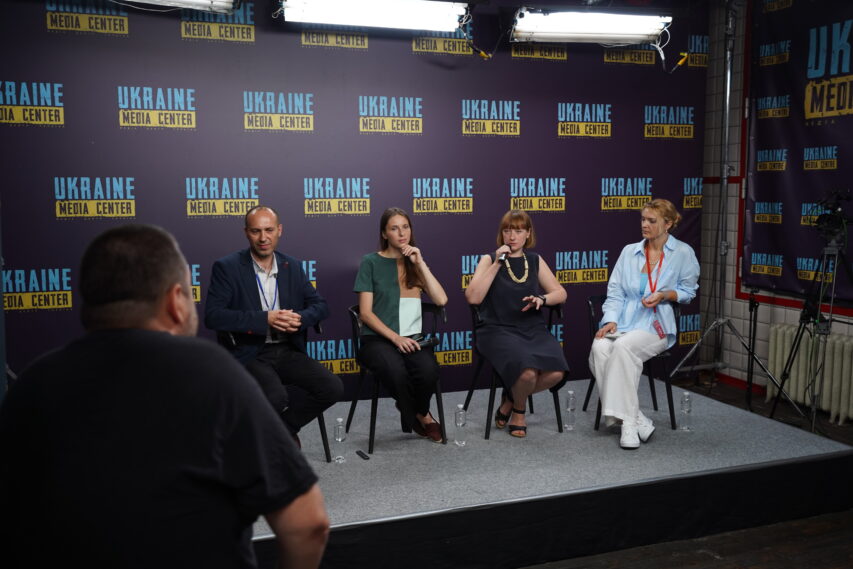 Participants of the discussion on Children of War: Adaptation and Socialization, Media Center Ukraine

A Discussion on Children of War: Adaptation and Socialization Took Place in Media Center Ukraine

During the discussion on Children of War: Adaptation and Socialization, experts discussed specifics of the teaching and adaptation of the forcibly displaced children. The discussion took place at Media Center Ukraine. The discussion was based on the results of a survey carried out by Lviv Oblast Council in cooperation with experts of the NGO Civil Society Development Forum according to methodologies of the Council of Europe project “Strengthening civil participation in democratic decision making in Ukraine.”

You can view the full discussion video here.

The following are the most vivid quotes from discussion participants:

Ivanna Herus, Head of the Education, Science, and Innovations Commission of Lviv Oblast Council, spoke about the new academic year:

“According to our current statistics that still can change by the end of August, about 10% of internally displaced children will study in Lviv’s schools, so the figure isn’t small. It will be up to the class tutors to configure the process, and we pay a lot of attention to them in our survey. Because whenever we speak about the adaptation of internally displaced children, this issue affects children from Lviv Oblast. It is the issue of how they will co-exist and help each other.”

Yulia Hvozdovych, an expert of the Council of Europe project “Strengthening civil participation in democratic decision making in Ukraine,” spoke about the survey results:

“Having surveyed everyone, we came to a conclusion that there is a certain basic set of problematic issues for internally displaced persons, their families, children, parents, and teachers of internally displaced children. These are not the issues that we need here in Lviv Oblast as charitable people who are accepting the people forced to flee the war to enable them to remain Ukrainians here, the people who did not want to go elsewhere so that we could rebuild this country jointly in the future, and we need to solve these issues. The major issue is, first of all, the linguistic barrier and cultural differences. All the stakeholders emphasized it during the survey, especially the internally displaced persons, of course.”

“The foremost thing that needs to be done is providing psychoemotional support for teachers. The children’s environment will shape their behavior… In fact, the children do not have the divisions to the extent you are referring to. Here, the motivation and psychoemotional condition of teachers and school administrations are the elements that need to be strengthened.”

Oleh Dukas, an expert of the Council of Europe project “Strengthening civil participation in democratic decision making in Ukraine,” spoke about expectations from the new academic year

“I hope the teaching process will be organized as safely as possible. Thus, it will be up to school principals to make decisions on how to organize a safe process, whether the children can come and study offline or have to keep studying remotely. Safety is the foremost concern. Secondly, I believe that the complicated situation where we have many internally displaced persons and children in Lviv Oblast should be used for cultural exchange and mutual integration.”